EWR receives many calls from homeowners requesting information on the relocation of animals. The most common reaction to an animal moving into the area is to think that a live-trap must be set, and the animal captured and relocated to a more suitable area. Although at first glance, setting a live-trap may seem like a reasonable solution, trapping as a means of controlling urban wildlife is ineffective and short-term at best. In fact, there can be many negative impacts from forcibly removing an animal, and these are mentioned to homeowners when they contact EWR looking for advice.

There really is no “ideal” time of year to relocate, as a displaced animal must always compete for food and shelter with animals that are already established in the area. Throughout the spring and summer months, the most compelling reason to not relocate an animal is the potential presence of nursing babies. During the winter months can be especially dangerous for a relocated animal, as food and shelter is scarce and can be life-threatening. Additionally, trapping and relocating an animal is highly stressful, they may be harmed as they are confined in a small box that is exposed to the elements, or they can injure themselves as they attempt to escape the confines of the trap. 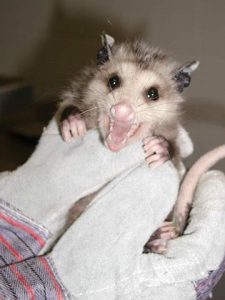 Another potentially negative impact of relocating animals is the translocation of diseases; the movement of disease-causing organisms such as parasites, bacteria and viruses from one area to another, exposing the residents of that new area to something for which they have no immunity. Sound familiar? In this day and age of large-scale travel by people, the translocation and worldwide spread of viruses such as Covid-19 has proven to be rapid, and without any inherent immunity, the resulting infections can be potentially deadly. The same is true for the spread of pathogens in wildlife. The prevention of translocation of diseases is an important factor in conservation programs where captive-bred animals are released into wild populations. One of the means of reducing the potential introduction of a harmful organism into the environment is to quarantine the animals prior to their release, much like we were urged to do to prevent the spread of the coronavirus.

When dealing with the relocation of wildlife, the provincial government has many regulations which protect animals from harm, and also addresses the potential of translocation of diseases. The current law requires captured live wildlife to be released within 1 km of where they were caught; a requirement that reduces the long-term effectiveness of trapping as a means to control wildlife, as animals are likely to return to the area. In the field of wildlife rehabilitation, the regulations dictate that only animals from the same area can be housed together, and that juvenile animals be released within 15 km of their capture site; 1 km for adults. EWR gladly complies with these government regulations, as we recognize that they are designed to protect the animals that were rehabilitated, as well as those in the wild.

When confronted with an unwanted animal, please contact EWR at 519-735-3919, and let us assist you in finding a more humane to address your concerns, and also keep the wildlife safe and healthy.